Sneak Peak for Members Only 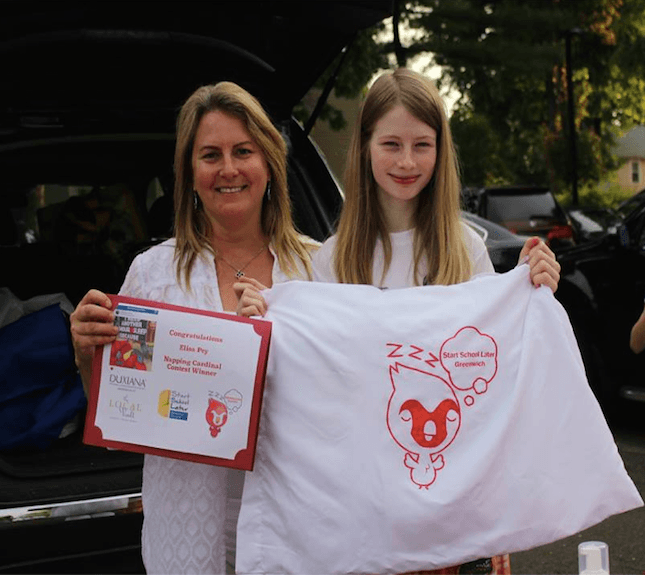 On March 13, Daylight Saving Time, The Local Vault joined a fun and educational campaign to teach Greenwich teens about good sleep habits and inspire them to ask for another hour of sleep by starting school later. The Napping Cardinal Contest asked teens to look around Greenwich for the tired Cardinal mascot who could not stay awake after school. Once they found the napping cardinal, they were asked to take a selfie with him, post to Instagram and add a comment beginning with “I need another hour of sleep because…..”

Over 700 teens in Greenwich are now following the Napping Cardinal on Instagram @nappingcardinal and we have final 12 winners based on the most photo likes and their thoughtful comments. The contest grand prize goes to Elisa Pey, 6th Grade, Eastern Middle School, who was selected for her amazing and informative essay she submitted on why she needs another hour of sleep.

The Local Vault partnered with The Duxiana store to provide the grand prize of a teen bedroom re-design including a design consultation, a Local Vault gift of one teen furniture item from our online inventory, a $250 Duxiana pillow and a gift certificate from Start School Later Greenwich chapter to decorate. Congratulations to Elisa and we look forward to our post on her before and after teen room re-design!

Teens need between 8½ and 9½ hours of sleep each night. But teens of today’s culture aren’t getting enough sleep. Why? The problem is the absurd school start times that have them up as early as 6:00 AM (the adult equivalent of this unreasonable time is 3:00 AM) — when they should be sleeping from 11:00 PM to 8:00 AM for basic health.
Teens need quality sleep to be alert to learn and be safe. All teens need to sleep AT LEAST an hour later! An hour later means it would be lighter outside. That would have helped my older sister who got a concussion on her way to the bus. Her concussion could’ve been avoided if the start times weren’t so absurd.

I saw a highly informative lecture by Dr. Judith Owens, who went to Harvard, about how necessary sleep is, and how the EARLIEST POSSIBLE school time for teens is 8:30 AM. I know that Dr. Owens is right because I know what an hour extra sleep time means for me. During the school year, I live at my dad’s house one week and at my mom’s house the next week and so on. My father continues to wake me up at 6:50AM to get me to school on time, and I’m tired as can be. I can’t concentrate. I can’t get much learning done during math class (my first class) as I’d be napping half the time, and forgetting that I was in school.

At my mother’s house, I may get to school an hour late, but I actually understand what my teachers are teaching. I’m better off coming to school rested because the drowsy feeling never leaves — no matter how many classes I try to sleep through.