Sneak Peak for Members Only

Author Jane Green on Storytelling Through Writing and Design 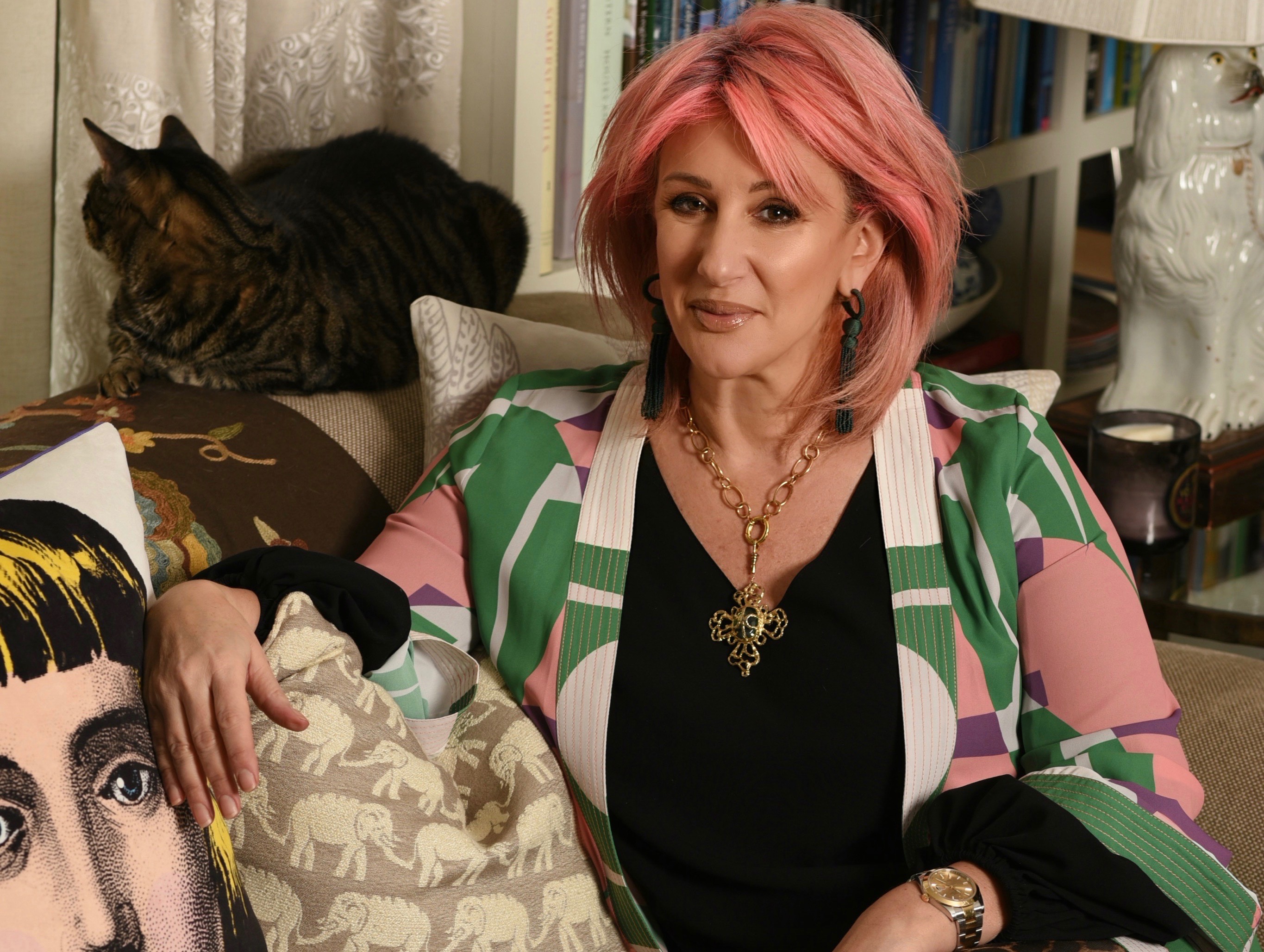 Getting lost in a good story is one of life’s great pleasures. When you love design and décor, finding yourself immersed in a story that also features homes that help tell the story, is even better. Jane Green, author of twenty novels (18 of which are New York Times best sellers), brings her love for beautiful homes that authentically reflect the lives of their inhabitants to the stories she shares. We caught up with the Westport based wife, mother, avid cook and gardener, to chat about her life, home, hobbies and learn about the stories her own homes tell. 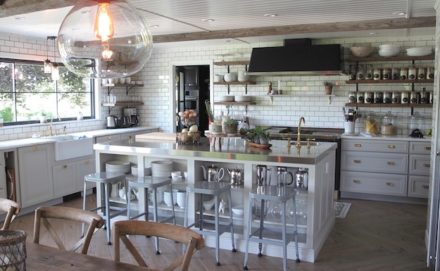 After becoming inspired by a friend who picked up writing and was published soon after, Jane Green decided to try her hand at story telling. “I had just read High Fidelity by Nick Hornby, which was a book about everyman, and I realized no one had done a similar type of book for women. Of course, little did I know that Helen Fielding was sitting in her flat, a couple of miles down the road from me, writing Bridget Jones’s Diary. But those books started a movement they called Chick Lit – honest, funny books about real women.” These stories, often for and by women, have since become a mainstay in popular reading, going to show how very beloved they are. Twenty novels (and one cook book) later, Jane has achieved a level of success that few enjoy. 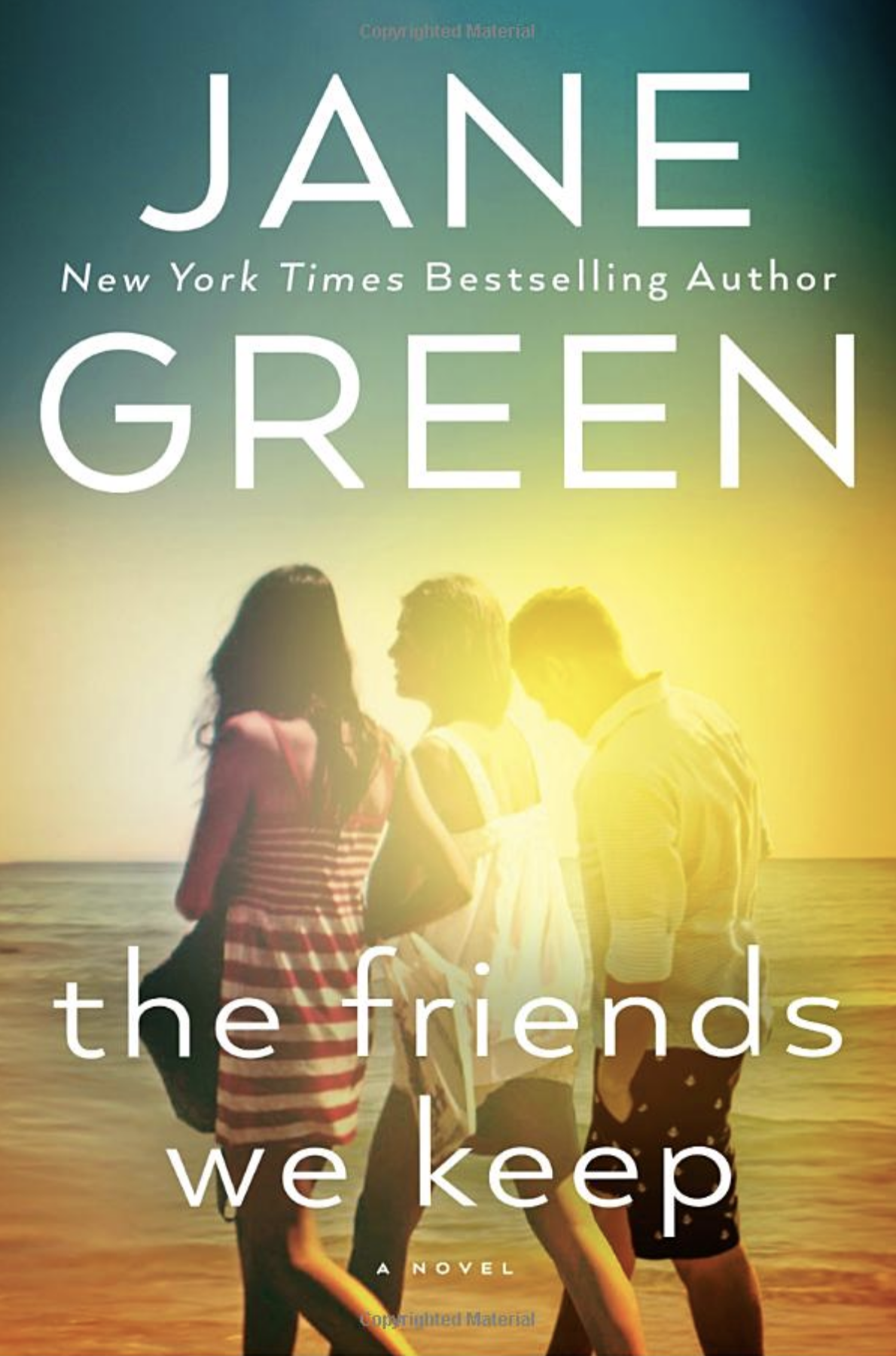 Growing up in a lovingly designed home sparked an appreciation for design and beautiful things. “My mother was an interior designer, mostly for friends, but has beautiful taste. I grew up in very old Georgian and Victorian houses in London, gorgeously decorated in Colefax & Fowler. She’s also a wonderful artist, who never had the confidence to do anything with it, although now, in her seventies, she makes the most beautiful sculptures.” 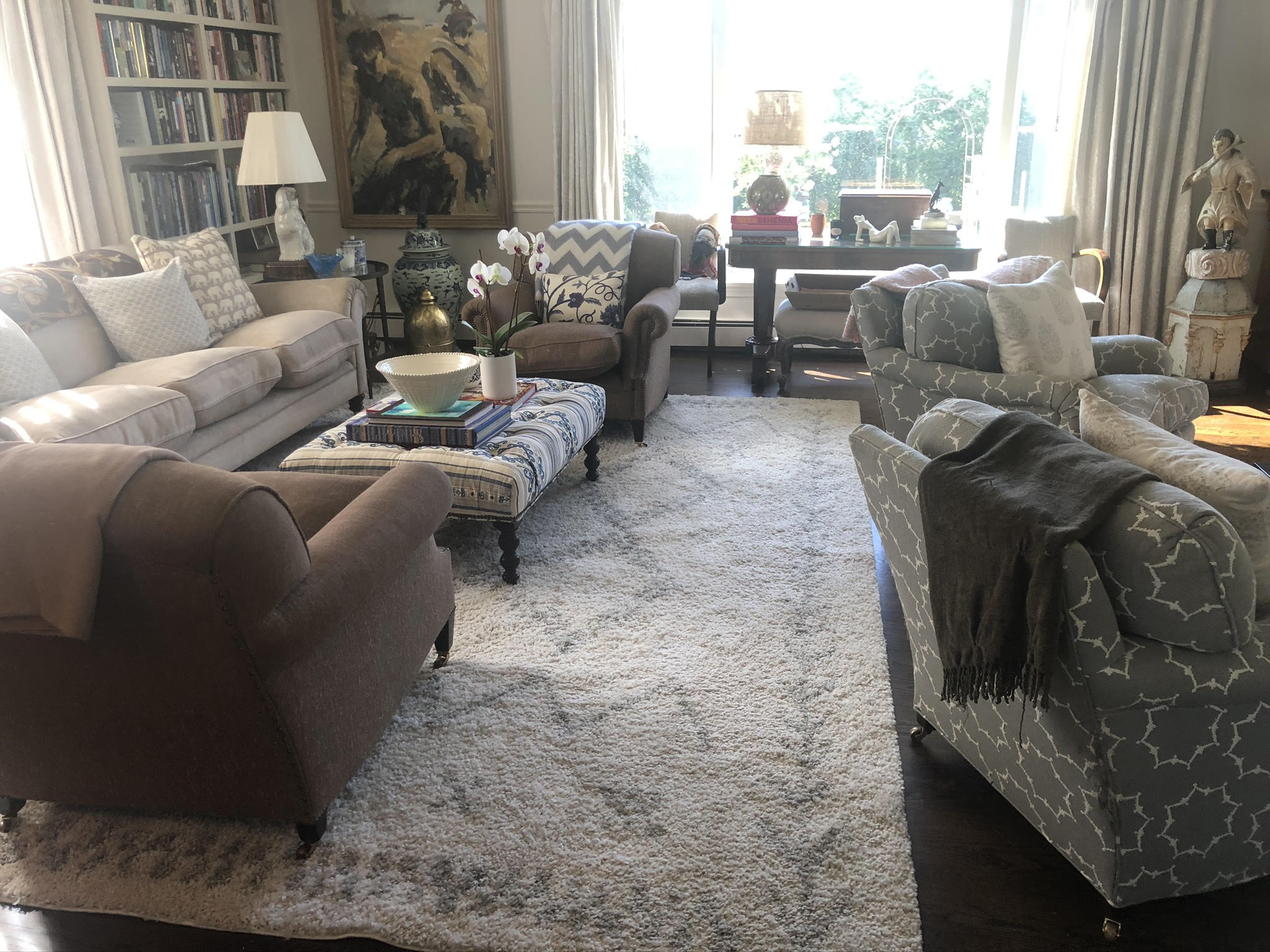 In her own home, she blends her eye for style with a focus on how the pieces in a space make a person feel. “I’m very English, and very traditional. I absolutely believe in Nancy Lancaster’s ethos – she was an American who moved to London and made the English Country House style famous. She believed in rooms that were beautiful, and comfortable, with books everywhere, and fresh flowers. She liked imperfection, and mixing styles, believing that if everything in a room is perfect, it feels like a museum, and lifeless. She said: “I like to preserve simplicity rather than over-polishing. Fashion is changeable. Taste is in realizing the essence of a place.” I mix family heirloom antiques with new, modern pieces, and I always wait for a while so I can discover the personality of a room. My biggest recommendation is comfort. Squashy sofas, lots of pillows, soft throws. I always want people to walk in my house and not only find it beautiful, but more importantly want to kick off their shoes and curl up on a sofa.” 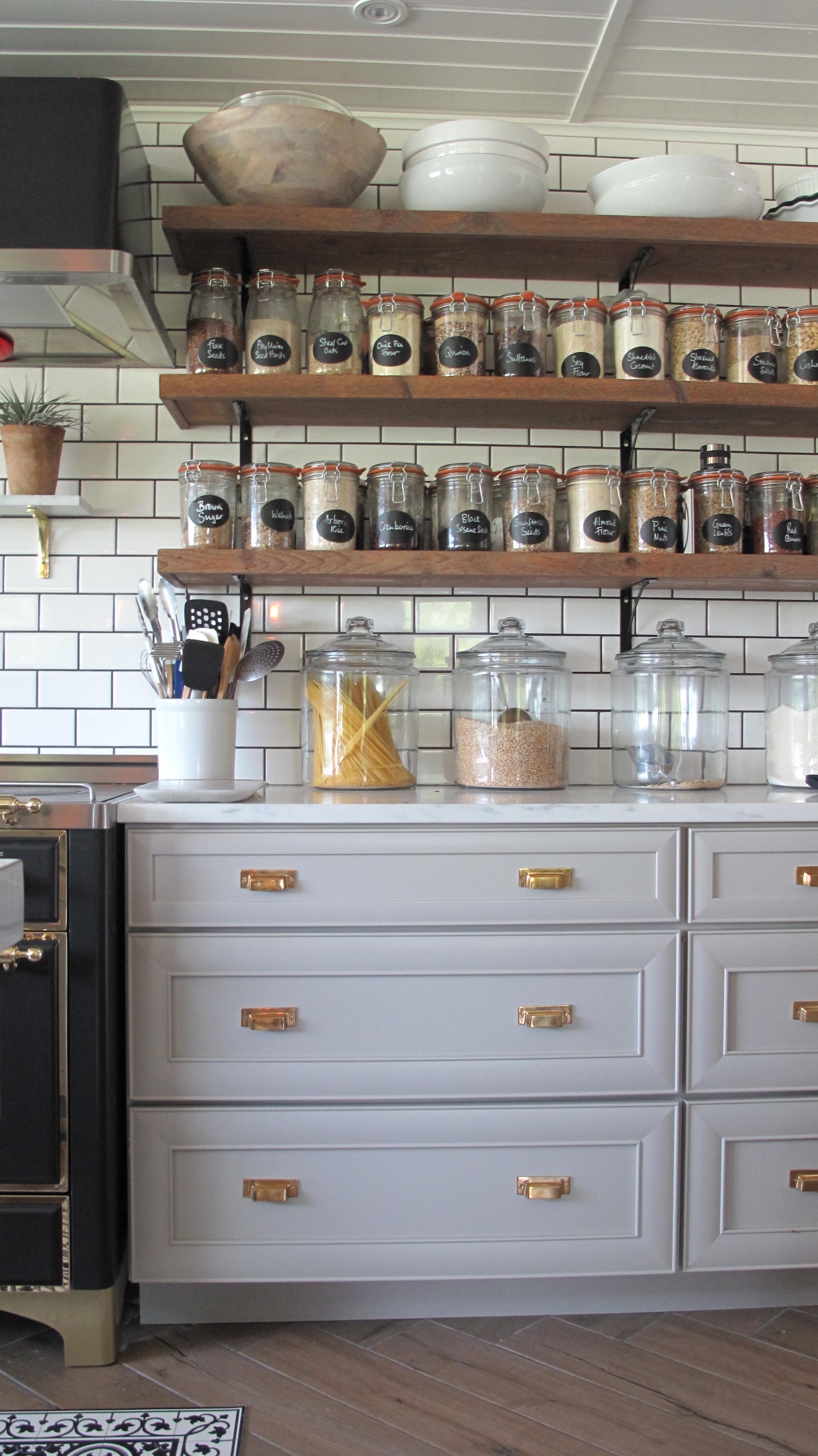 While stories play a huge role in her life work as an author, it is also an important aspect of her homes. “I do all the design in all my homes, and I would describe it as English country meets American beach. My favorite items in the house are all family heirlooms. We have a bunch from my husband’s grandmother – lovely marble obelisks, a desk, tables, and my own parents sent over my favorite pieces from childhood when they moved – our dining table from our house in France, a chest of drawers with a marble top, a gorgeous walnut console table. Anything that tells a story is welcome in my house!” 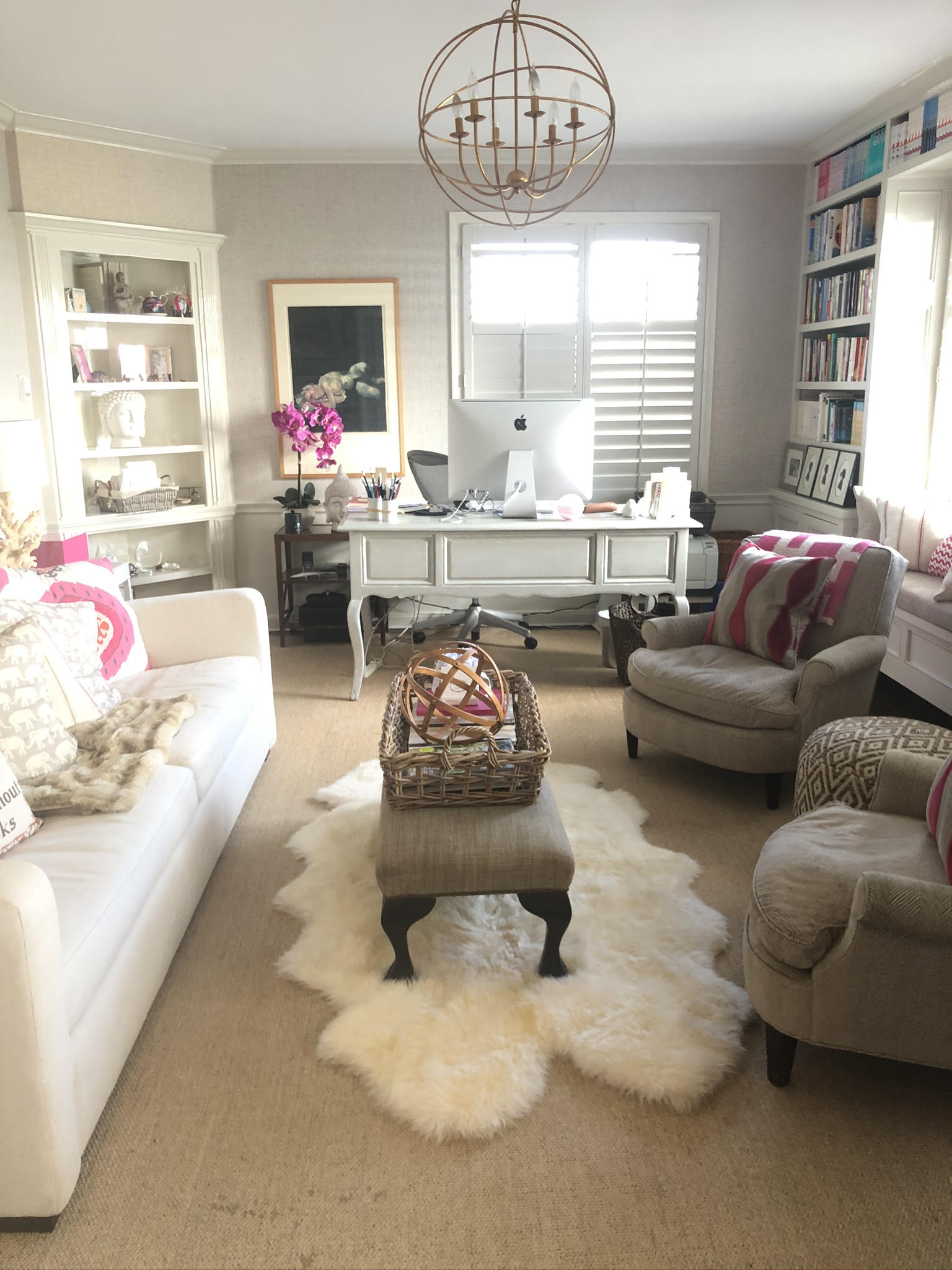 Her homes tend to have so much personality that they even inspire names – though much like Jane herself, the names evoke a sense of whimsy and humor. “My husband and I built our last house. We thought we could be very clever and build a house that looked and felt old. In the end, it was very beautiful, and quite unlike the other new houses popping up in our town, but we were wrong about being able to build a house that felt old. It didn’t have the soul that old houses do. When we closed on the land that we had bought in order to build, there was one mature and wonderful fig tree, the only thing I was excited about. On the day we closed, we went to the house and discovered that the prior owners had dug up the tree and taken it with. This was August when you never transplant plants, and karma has whispered that the fig tree did not survive. So there we were, figless.” 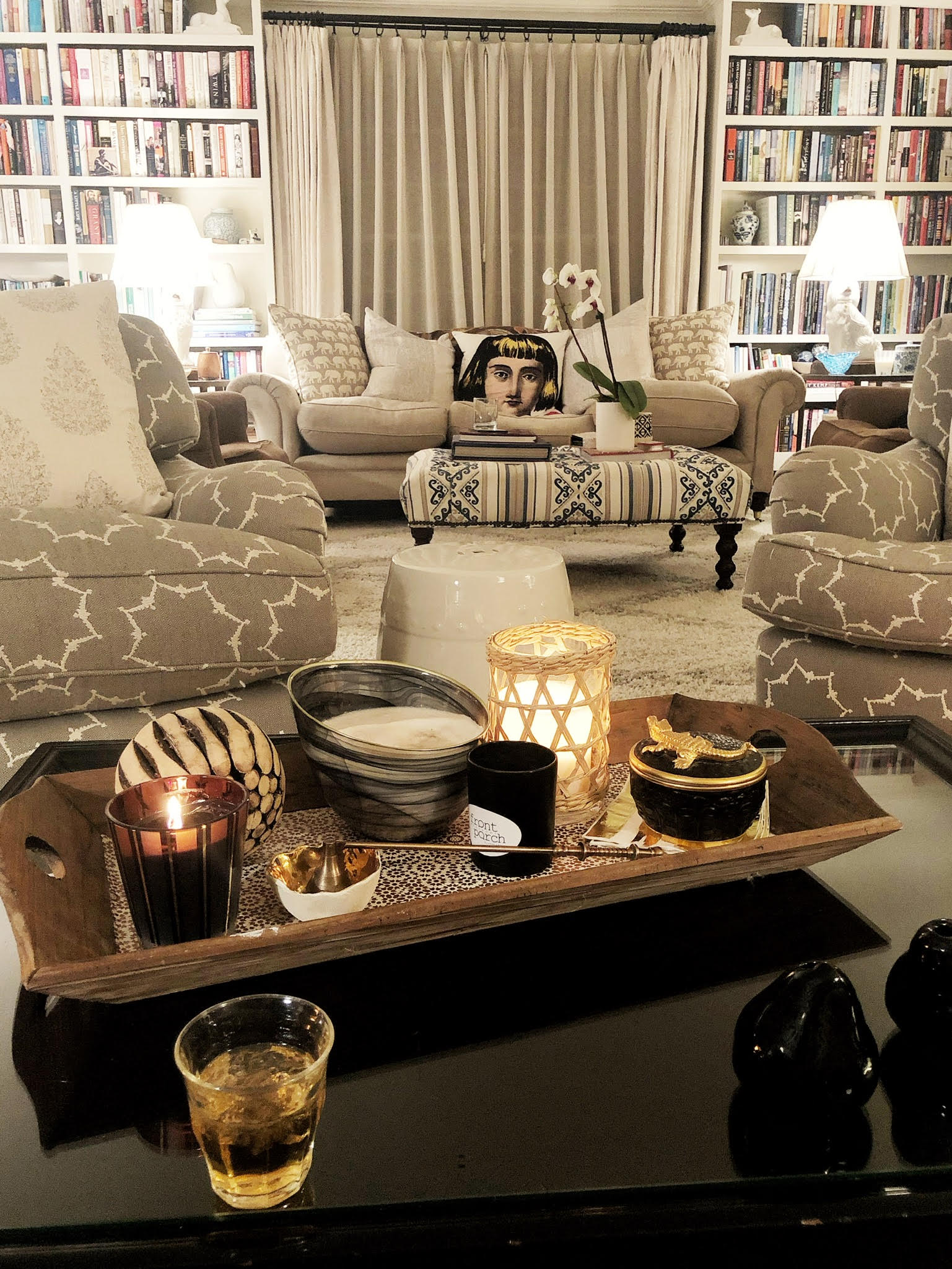 In addition to Figless Manor, her current home as also inspired a name. “We do it as a joke. It’s never a formal naming, but tongue-in-cheek irony, rather like David Sedaris calling his house on the beach Sea-Section. Figless Manor was due to the stolen fig tree, and now we are in a heavenly old cottage on the water, that was winterized and added on to over the years, but it has sloping floors and had no insulation, so when the wind would blow, the house moaned and squealed, and it felt like it was coming down, so now it is Creaky Cottage, not least because it also sits on a creek.” 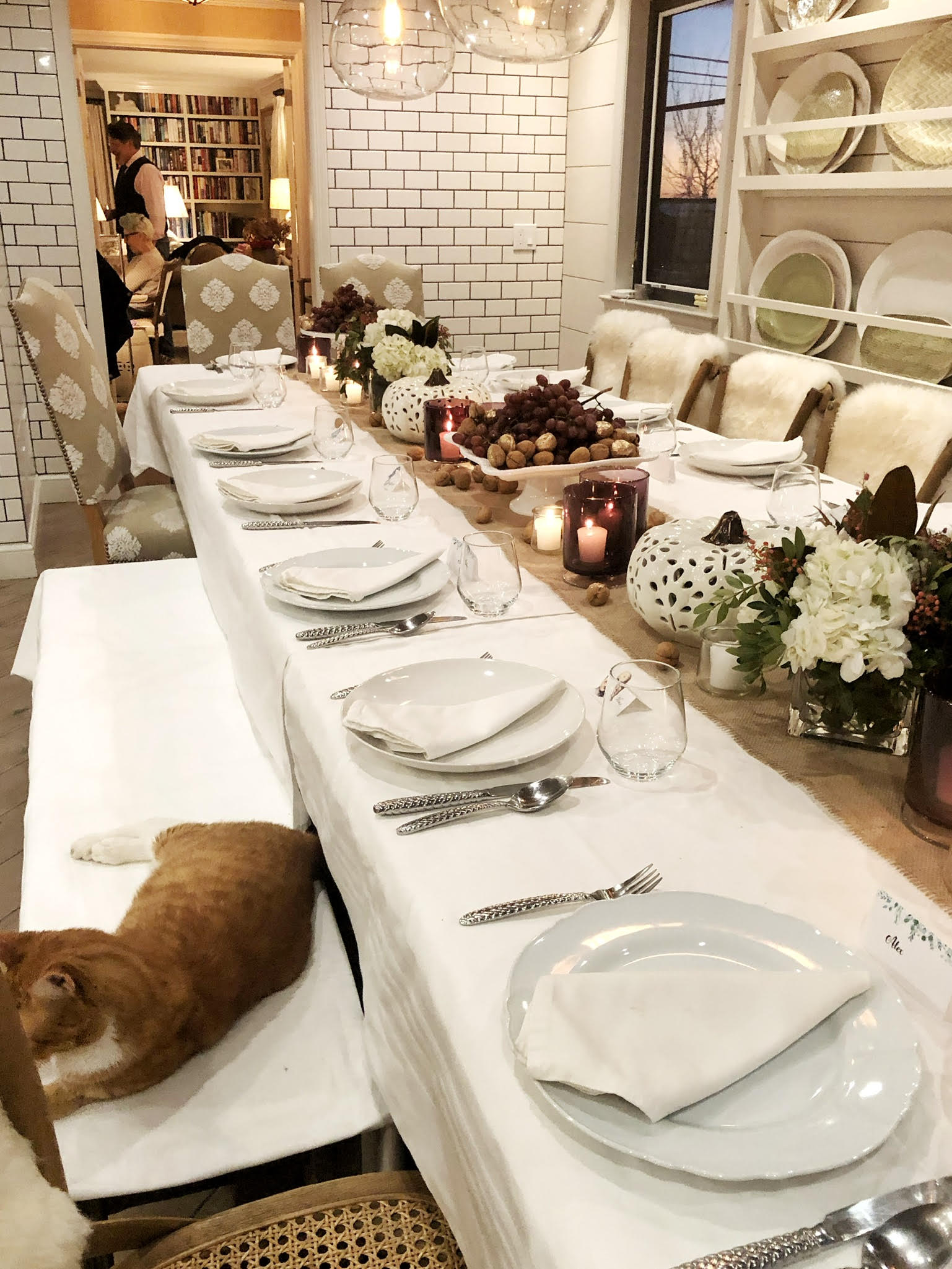 Like many of us who have been in lockdown during these last few months, despite having more time, turning to work has not necessarily been easy or helpful but her ability to listen to what she needs at the moment is inspiring. “During this pandemic, I found I couldn’t write at all, nor read, which was somewhat devastating. I didn’t have the focus, so instead, I started gathering oyster shells from the beach and decoupaging them, which calmed me down and kept me busy. I am a former art student, so whenever I get stuck, I tend to turn back towards art in some way. I think I’m very much my mother’s daughter, with a good eye, but honestly, I just know what I like and I trust my instincts.” 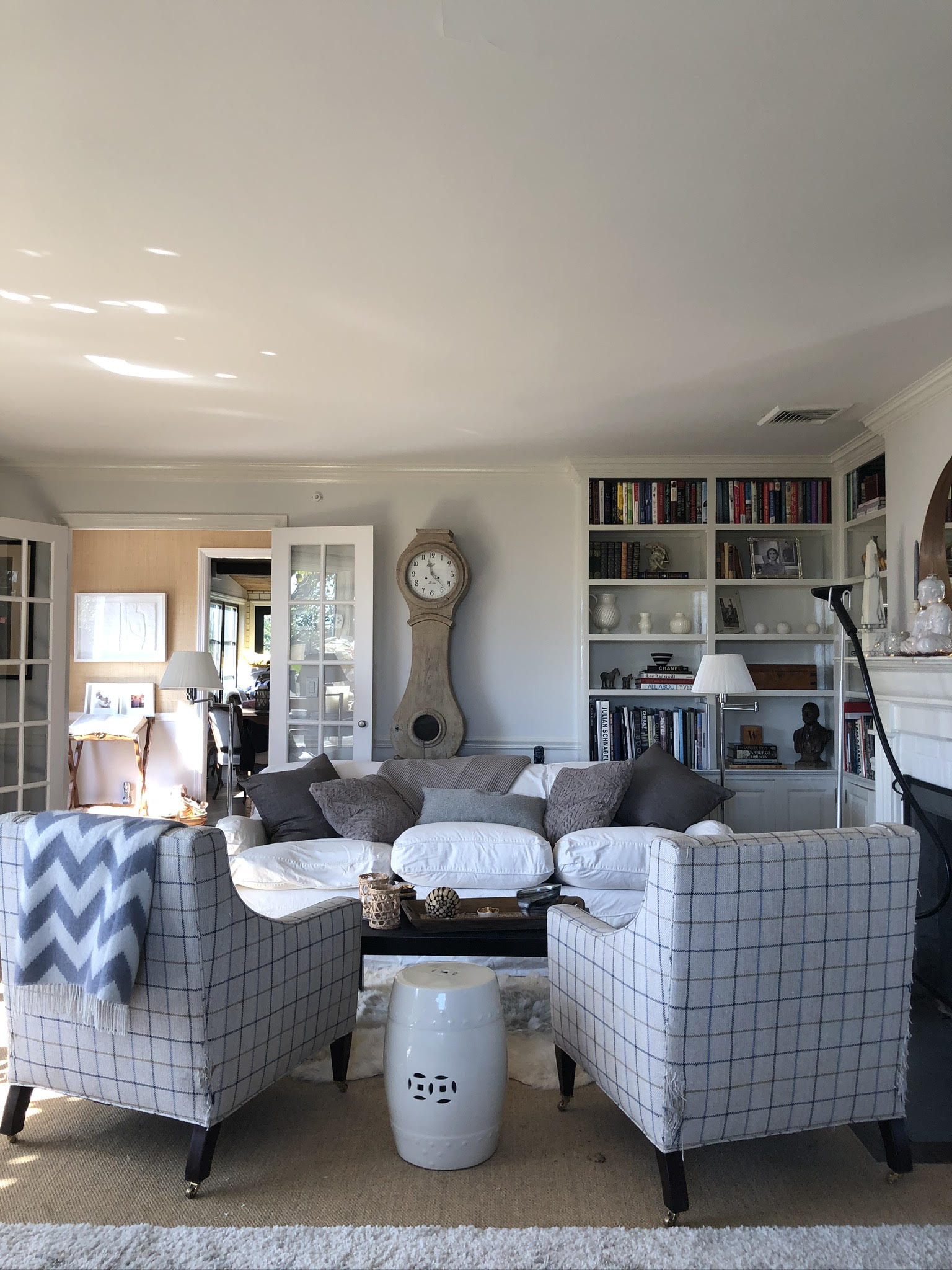 Trusting her instincts has extended to her personal style as well. When asked to describe her aesthetic she replies, “Evolving. I’m finally discovering just what it is. It turns out I very much love a more bohemian look – caftans, flared pants, huge earrings. I was really born a decade too late – I should have come of age in the sixties and seventies. There is a very famous picture by the photographer Patrick Litchfield of Talitha and Paul Getty on the rooftop of their Moroccan palace in the sixties. That picture is the essence of everything I aspire to!” 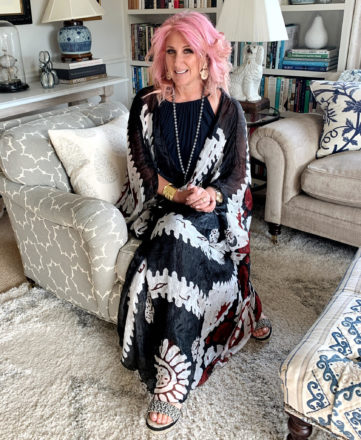 TLV: What are you currently reading?

JG: There are so many good books this summer! I just finished Musical Chairs by Amy Poeppel which comes out July 21st and is GLORIOUS, the best book I have read in ages. Also Untamed by Glennon Doyle, All Adults Here by Emma Straub, and Friends and Strangers by J. Courtney Sullivan.

TLV: What do you do for self-care or to relax?

JG: I garden like a maniac, which I suspect is simply in my DNA. I’m never happier than with my gardening clogs and gloves on, a pair of secateurs in hand, clipping, pruning, or weeding. In winter I tend to just get into bed. It’s the only room in the house that’s completely child-free and quiet!

TLV: Where do you like to travel for inspiration?

JG: I fell completely in love with Morocco last year, which made its way into my novel in a major way. We also have great friends who live part-time on the island of Nevis, which we also fell in love with. I suspect we will travel more when the last of the kids fly the nest (the twins are off in a year), but right now we so love our house, and I am something of a hermit, there is no place like home.

TLV: When you write a book, do you think about the design of the homes your characters live in?

JG: Always! In fact, the house very often becomes a main character in the novel, as happened with The Beach House. My heroine, Nan, lived in a rambling old shingle on Nantucket, which very much stole the show. I’m now about to start writing a sequel to it, featuring another wonderful old house, this time a Victorian Italianate.

TLV: You have been the emcee for atHome’s A-List awards for many years, does that tie-in to your love of home design?

JG: I do a fair amount of public speaking, and love it, which is ironic because of my fear of cocktail parties. I can happily stand up in front of thousands, but walking into a cocktail party fills me with anxiety. I was asked to emcee years ago because my love of design is so well-known, and hopefully because they find me entertaining!

TLV is about sharing, supporting and discovering all that's great about the community we live in. We strive to inspire, enlighten and sometimes entertain. Our team of tastemakers are mothers, wives, sisters and friends, and together we share our musings about love, life and home.